Okay, my vacation was a working one at the Writers’ Police Academy August 11th through the 14th in Green Bay, Wisconsin and it took me a week to recuperate from it. But it was a BLAST…in some cases literally. 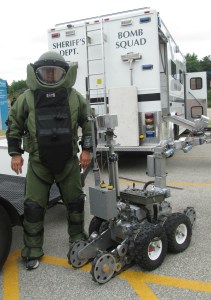 I didn’t get to try the bomb squad suit on, but I handled it and a few other pieces of equipment. My favorite was getting familiar with and shooting a Glock 17. Heavier than I expected but with the sweetest trigger action. The gun pictured is red to indicate it has no firing pin and cannot be fired. We learned how to hold and load this gun before we were given the fully operational version. Any of you who’ve watched the TV series Quantico saw the trainees carrying these guns. It’s been years since I last shot a gun, but I still got it! Wish I’d kept my target so I could prove how deadly I can be. 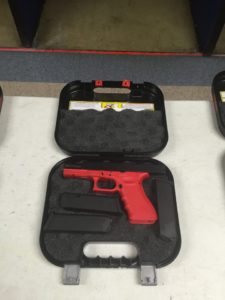 photo thanks to author Lee Golberg

Next year, I’ve got to try these. 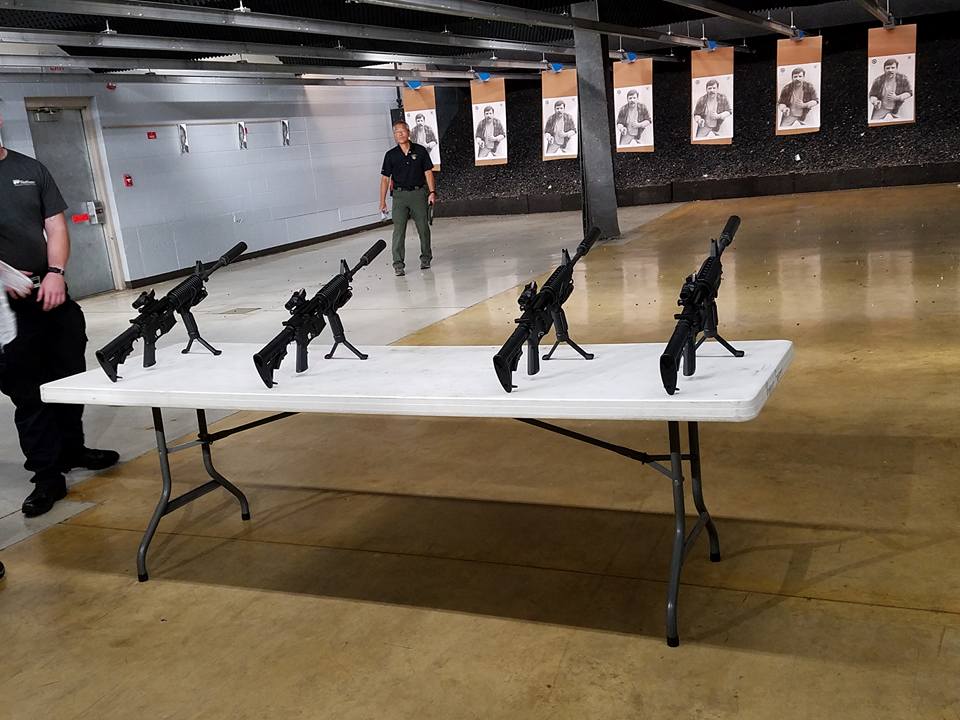 And yes, I got inside that SWAT vehicle as well as the armored vehicle on the opening day of the confernece. Check out the size of the armored vehicle in the 2nd and 3rd pics. I couldn’t get into the driver’s seat as the first step was waist high on me. But, with the help of a few friendly strangers who are no longer strangers to me if for no other reason than they hoisted my butt up to that first step, I did manage to get into the cargo area in the back. Photos thanks to my writing pal Cindi LeRoy 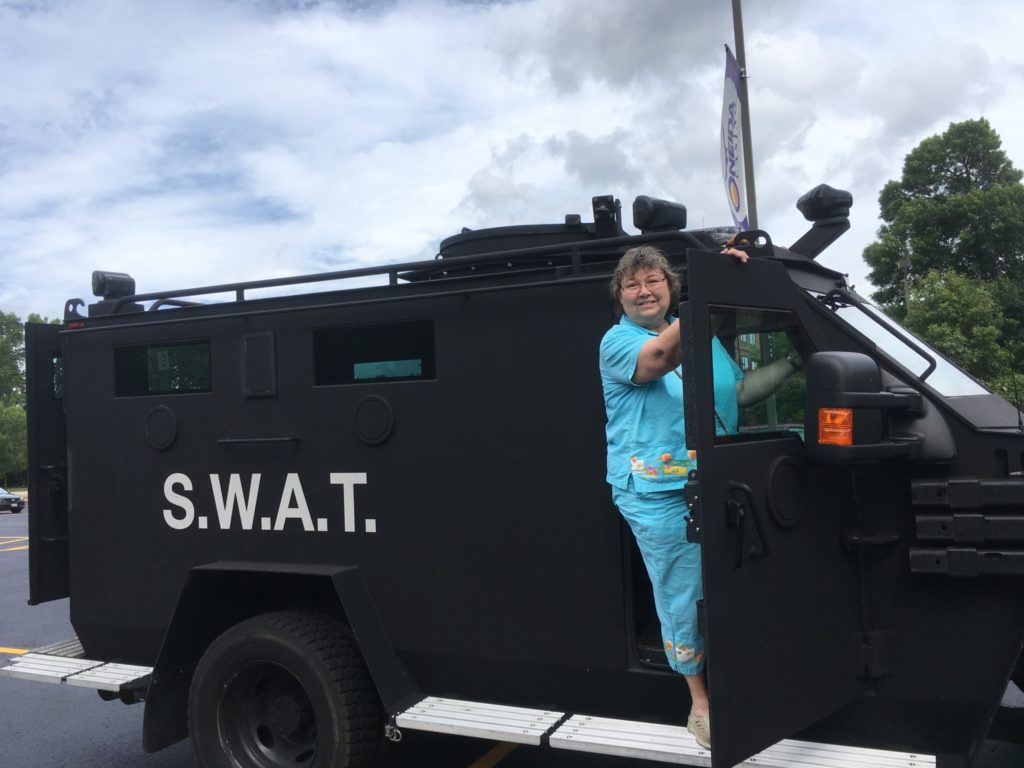 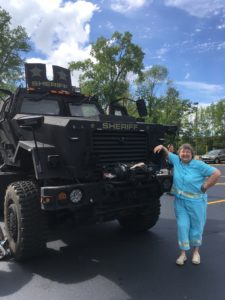 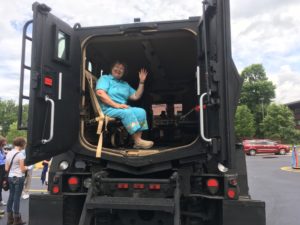 Friday morning started with a mock crash scene, complete with police cars, ambulances, and fire truck with sirens and lights and a rescue copter. Picture provided by Melinda Leigh 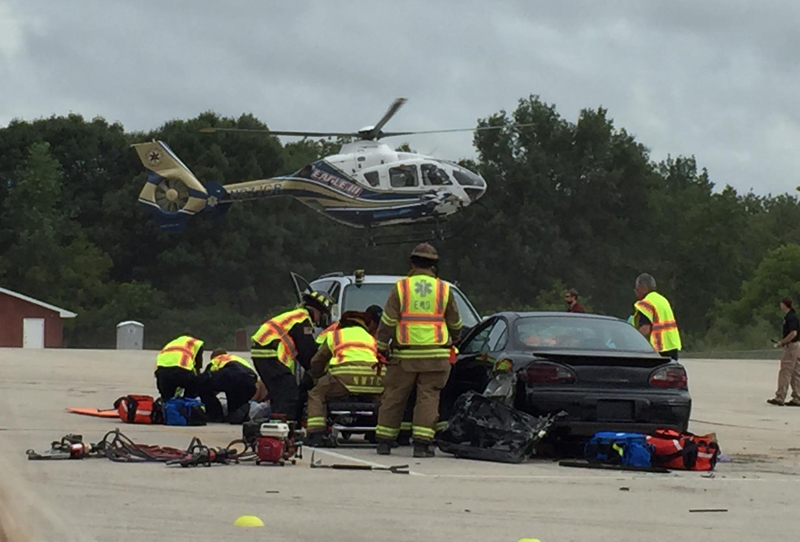 I later learned how to poison a person with bacteria from my own cupboard or the woods out back. TIP: mushrooms are unreliable, even the known poisonous ones.

I finally found a use for geometry in self defense. It’s all about the angles. TIP: when fighting an attacker, fists to flesh, palms to bone. Meaning, don’t punch ’em in the face and risk injuring your knuckles. Use the heel of your palm against the jaw and cheekbones.

Saturday morning’s interactive session: a surprise a mock locked down because someone was going around the campus stabbing people. Below: injured being cared for by audience members with medical training. 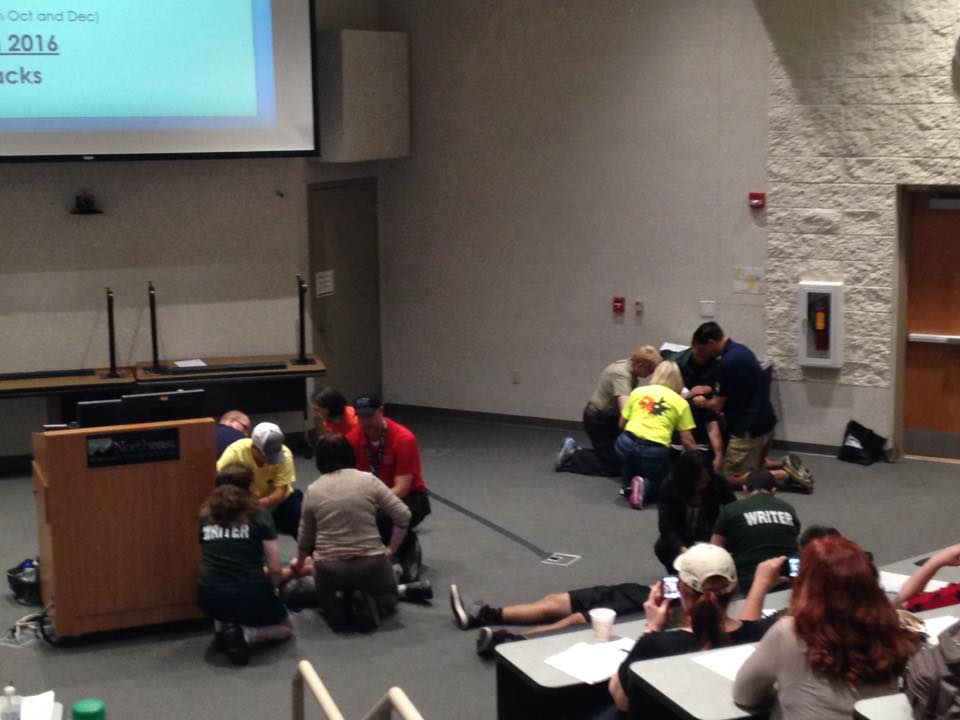 Everything was easy to observe. Lee Lofland‘s shot from the top of the lecture hall gives a perspective of how big yet well designed the hall was. I’d point out where I was sitting, but I was out of frame way up in the far corner. Thought I was smart taking that second seat down from the handicap zone and avoiding all those stairs as I’d come in from the upper level doors. Ha! Joke was on me. More on that later. 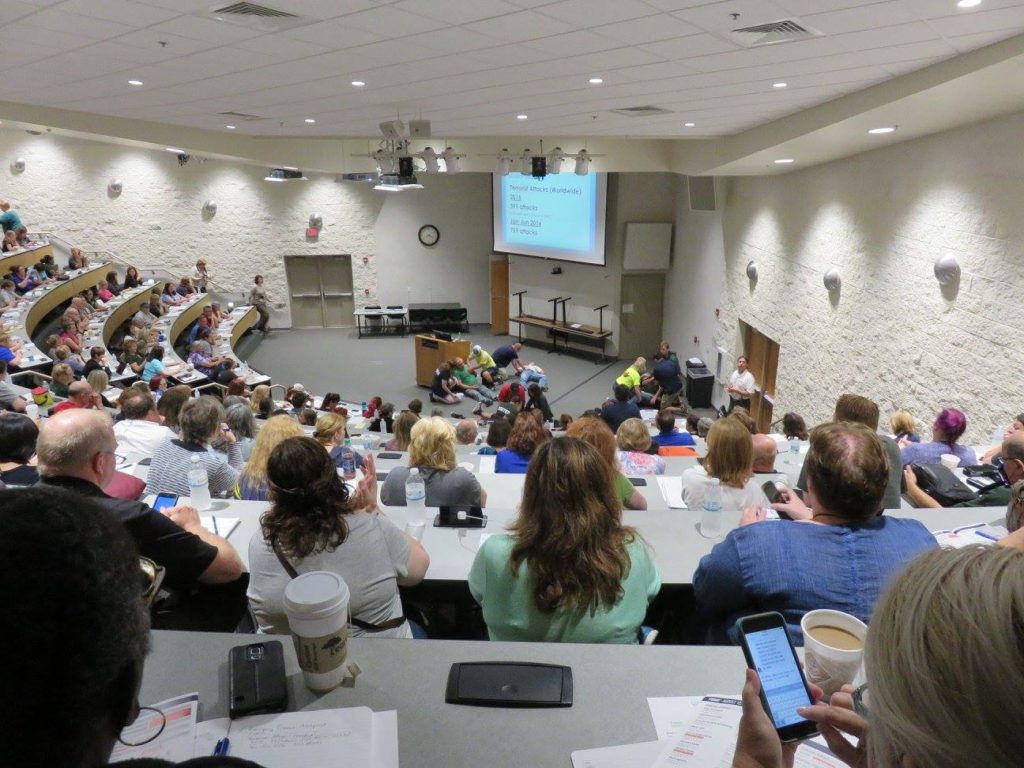 Then S.W.A.T team burst into the room shouting, “Hands on your head!” It was so real I got an Adrenalin rush. Even though I’d already learned that the Glocks with the red slides like these guys were pointing at us meant the guns couldn’t fire, it’s no fun having a gun waved at you. Amazing how a handful of men could control a room of hundreds. Photo thanks to Mike Riegel 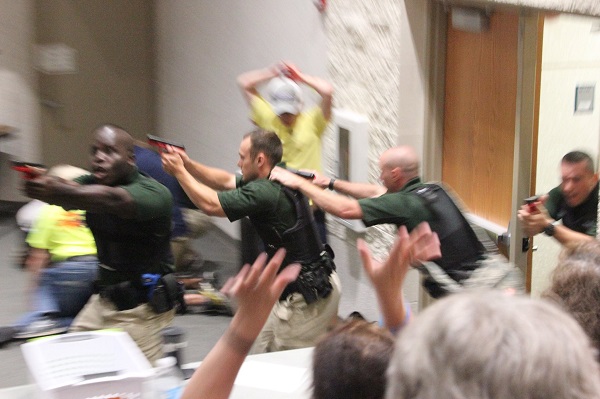 Once they had us all seated with our hands on our heads, they started clearing the room. Here’s “the more on that later part.” They started with my row. I wound up having to walk down all those steps with hands on my head, bad knees and all. I even got frisked. I have no doubt the officer frisking me could attest that I wasn’t wearing an underwire bra. Told you it was interactive.

For more information on this event or attending next year’s repeat in Green Bay, Wisconsin, click on any of the Writers’ Police Academy graphics or this link. See more photos on any of the author links credited to the pictures.